Today I felt drawn back to more small playing card images and checking out on Tarot images again - The Tower and The Hanged Man were calling to me for some reason. The small cards are such a lovely way of story-telling, asking to be shuffled and re-arranged to tell many different narratives.... 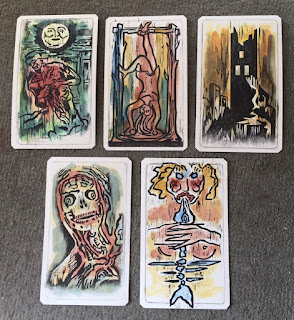 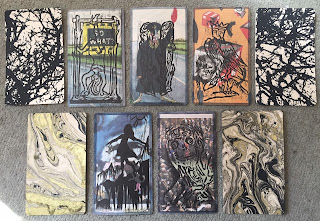 (these are ones I did before - see post a year ago - they have nice backs too, very fiddly to make!)

Looking up The Tower I found an image of a male and female figure falling, and thought - should I have a Fool and Fool-ess in emancipated times, when 'man' no longer necessarily means humankind; my figures are supposed to be fairly androgynous , so tightly bound up... but hmmmm.... 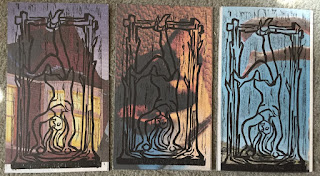 I did do some hanged women before, tho really they are just having a nice night out...

The Hanged Man traditionally represents a change of allegiance or point of view - very relevant now then after 10 years of 'austerity', and The Tower is a symbol of judgment, a wake up call by cosmic forces perhaps....
I could complete this trilogy with Fortitude in face of tribulation, traditionally a figure overcoming a lion - not many lions in the woods round here , though wild boar now roaming fearlessly in empty streets in towns and cities in Spain and Catalonia where my son lives he tells me...
The Wheel of Fortune would also be good - as it turns it is the great leveller in society, and The Hermit is usually shown with an hour glass, time again, the sands of time running out.....
The Fool is the 22nd card of the tarot but not numbered - like our packs with a Joker.

But I don't want to get to drawn into all this  - I mostly feel a strong visual connection for my Fool with Tower and Hanged Man - and possibly tomorrow The Magician - card of change and transformation, fecundity and dreams, and The Falconer, with a bird on his wrist, would be good images for my trees......
I remember writing about Elisabeth Bowen in my Women Artists book and she described how many more people had 'strange deep intense' dreams during the second world war....

Why am I so interested in Tarot ? I do feel some of these images are still locked deep within us as firmly as abc - they are tools to communicate with when thinking about the inexplicable....Digital storytelling has taken new turns but still relies on fantasy worlds with often recognisably old medieval tropes, and I have always loved ideas and imagery from the Middle Ages; perpetually on the cusp of new technologies they seem so like us, excitable but not yet world weary. Tarot cards possibly appeared first in Ferrara, one of my favourite Italian cities, but these were also based on remnants of Egyptian books of wisdom.
My 'tarot' cards no way adhere to any system in particular - printed over newspaper images I use the term to describe the effect of palimpsests on the brain, stimulating ideas and connections in that way that cards are used for divination almost, a framework for personal and collective imagination. 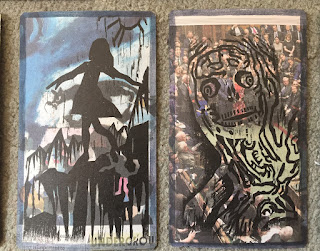 The card on the left is actually based on the Tarot Fool card so I did do a woman fool last time; she is teetering on a precipice with her little dog - I should have photo-ed the Waite pack image for comparison - and then I printed her against a bit of a painting with a wonderful hunting cat on it...The Fool in Tarot is related to Diana the Huntress with her hounds....I found this out today long after I had done the image.... 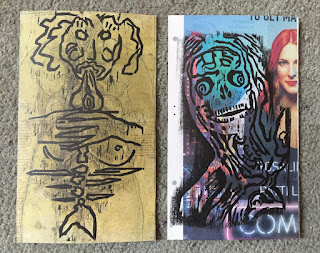 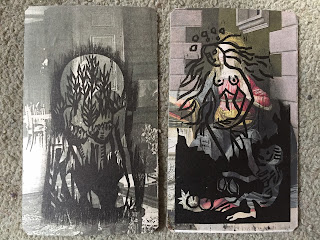 Sometimes the image behind suggests something really interesting, Parliament sitting, a Leonardo drawing, sometimes I have just chosen them for their good colour....I think it is probably quite hard to focus on them in the right way on the screen.

Playing card size and format, (they need to fit nicely in the hand), appeals to me greatly; when painting in tempera I loved working on little gesso-ed blocks you could hold in your hand like icons, with deep box frames that drew you into the picture, leaving the world of galleries for example behind...

By the end of the day today I had designed two more cards and started cutting them...adapted from a Ship of Fools image and  a previous tarot card I did - I feel they will add more dimensions and edge to the tree/fool series forest; might do a couple more tomorrow.... 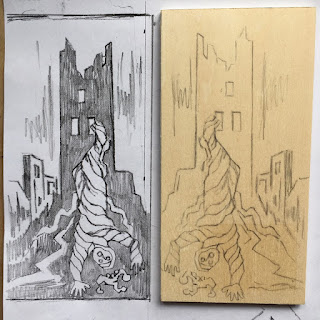 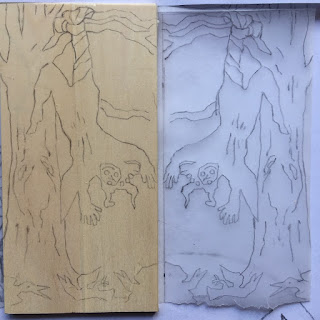 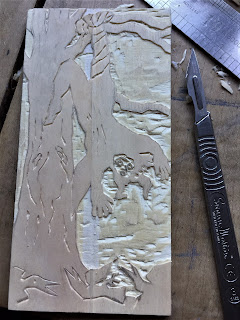