1974 NEW GRAFTON GALLERY London
First one woman exhibition.
Thereafter exhibited widely in group shows,
and at the ‘Upstairs Gallery’ at the Royal Academy
and the R.A. Summer Exhibition every year 1975-89

and also contributed to the book ‘The Cultural Life of Images – Visual Representation in Archaeology’ ed. Molyneux pub. Routledge 1997

My book on the life and work of the designer Peggy Angus was published autumn 2004 by Incline Press.

My stand at the Work on Paper Fair 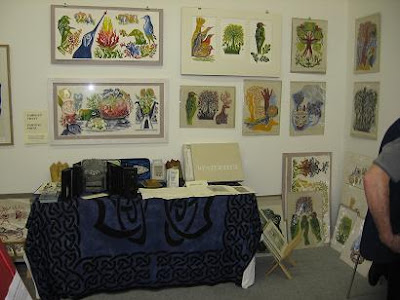 Many thanks to Christine Tacq for sending me this picture of my stand at the RA Work on Paper Fair last week. I displayed a lot of prints from previous books, thinking they might sell at this Art venue - but in the end it was the books that sold best, very gratifying to introduce the idea to a new audience.
The large long prints on the left are collagraphs from 'The Garden of Earthly Delights' that I did in 2004. It was based on the centre panel of the Bosch painting in the Prado and I commissioned a long poem from Judith Kazantzis which wrapped round the triptychs; we both love birds so they featured largely, with lots of fruits and berries as well. It sold out very quickly as it was so time consuming to print that I only made 12 copies.
On the right are woodcuts from Lorca's Sonnets of Dark Love which I began in 2000; I have only just finished printing the last of 30 copies and all are now sold.
Among other things on the table is 'Beauty and the Beast' - an installation book and a one-off, a dressing table in a forest of scrunched leather trees ( made from bilers jackets ) - the dressing table is made up of tiny books and drawers of objects, and the side panels contain miniature tableaux.
Eventually I will post up specifications of the books I have done and more images...
but at the moment I am pre-occupied tearing up paper for pages for my next book, I'm a third of the way through - only another 20 hours worth to do......
Posted by carolyn trant at 14:54 No comments:

I've been sent a wonderful magazine, the in-house journal of the Jean and Alexander Heard Library at Vanderbilt University, Nashville Tennessee. They bought one of my large Artist's Books of colour woodcuts and hand-cut texts last year and you can get a bit of an idea of it on this site...

Strangely this book of mine is the only large one not in a major public collection here in GB although it is in several private collections here and in lots of Institutions across the States.
Posted by carolyn trant at 09:24 2 comments:

I promised links and here they are...
the addresses we have for the friends we were exhibiting with at the Art on Paper Fair are

http://OldStilePress.blogspot.com
which will also lead you to their website

www.theoldschoolpress.com
should also contain a link to the Fine Press Book Association website page
members now include a variety of makers and printers

Although I call myself a press ( it helps when ordering vast quantities of materials from people who aren't used to enquiries from individuals!), I really consider myself a maker of Artists Books.
I have come to this art form from the route of being a painter and a printmaker, and still want to be called just an Artist; but I love keeping company with any other makers of things and admire all sorts of skills. I hate putting people into categories. We know what we are.
It was good putting our sort of books back into Art at the Fair, as just works on paper, made in lots of different ways.

When I was a very little girl this was what I always said I was going to do.
Soon I'll try and add my CV and see how the route waivered....
Posted by carolyn trant at 08:14 No comments:

After the 'Work on Paper Fair'

Welcome to the blog to all the people who took my cards at the Work on Paper Fair; I hope you have enjoyed seeing Winterreise again in the small images below.
You will have to bear with me - I will get some more books up on the site soon but after a busy 5 days I'm exhausted, still dealing with ongoing business from the Fair, and new books are calling, in fact positively screaming, with more deadlines approaching; but I'll get there eventually....and you may even get a picture of us at the Fair if someone sends me a picture - we forgot our camera.

The Fair was well worth doing because it introduced a whole lot of new people to the concept of Artists Books; and we always meet such nice people at these Fairs ( its always good for morale when people like what you do!)
Even if, in fact especially if, people can't afford to buy them, at least the work has been seen and is out there in the group consciousness somewhere.
And even tho I whimper that I would really rather be at home in my burrow making more books, getting some feedback as to whether what I am trying to say makes sense, and is in fact communicating to even just a few people, makes it all worthwhile.

We hope we will do it again next year, but we shall see; watch this space for information. Once I've worked out how to do it I'll put links to the sites of the other bookmakers in our 'Covered' section.

Meanwhile back to work finishing books for people who ordered them. Feeling a bit schizophrenic still - people seemed to divide my work into two categories and some like only one side or the other - jokey/serious; colourful/monochrome; light/dark; - to me it is all part of the same thing and the same me ( and us ). Isn't it? Discuss.
Posted by carolyn trant at 08:23 No comments: