Disgraceful:that's what adding running a gallery to an already busy schedule does for you.
Our next show starts on sunday! 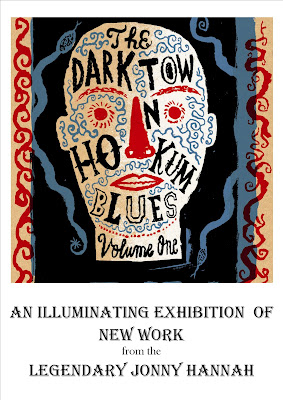 Loads and Loads of Lovely Printed Stuff –
silk-screened books and prints,
lino-cuts, cards, T- shirts and
his unique hand painted cut-outs on board,

Featuring Luscious Lettering
with a range of very reasonable prices
and guaranteed to bring some joy
and razzmatazz to a dark month.

We will also have some very unusual
Valentine Cards! 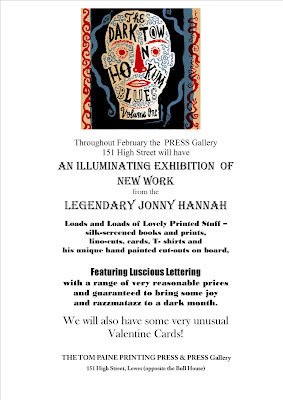 but you might not be able to read it
Anyway it should be a really great show.

We kept Dmitry's work for ages as it was so popular and we have quite a range of little private press and Artists Books for sale now and people seem very interested in seeing what we have. The Press is up and running and Peter gathered up some more type over christmas. We've got card toy theatres and artists cards, specialist books on lettering and typography; and plans for more interesting shows throughout the year, including lettering used in paper cuts, lettering and ceramics and something Carnavalesque for Lent.

However I did fulfill my resolution and make a pilgrimage to the Green Chapel on New Years Eve (daytime!)to help get me in the mood for this year's Perceval book.
The Green Chapel, home of the Green Knight, is reputed to be in Staffordshire in The Roches at a place called Lud's Church; a cleft in the ground where the persecuted Lollards of the 15th?? century used to hold their services apparently.
Despite heavy snow on hills around, making many of the small roads impassable ( near Flash - one of the highest villages in England) - this valley was miraculously green and we toiled up a hill not knowing what to expect, when all of a sudden we plunged into the chasm - which was spectacular and scrambled for what seemed a very long way before emerging into the woods again.
An extraordinary place.
And the Green Knight himself clear as clear on the rock face - the camera homed in on him immediately itself.
There must be some strange magnetic forces around as my camera card immediately failed and unformatted itself, so the following pics are courtesy of my son Will: 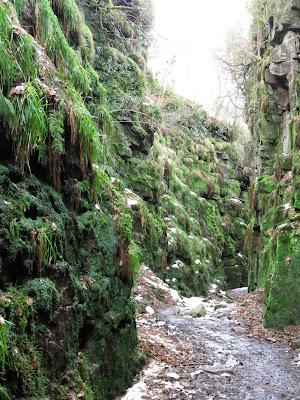 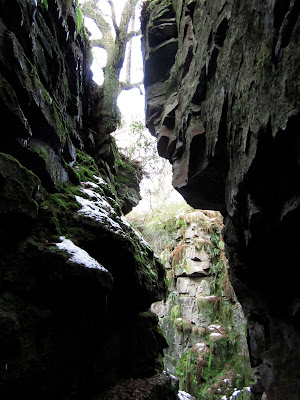 You have to imagine the icicles and ferns and green gloom.....

Apart from this the year has got off to a good start with lots of plans and feelers stretching out into the year; some book fairs coming up - of which more news anon; some good discussions with Victoria at Kaleid Editions, with Tereza Buskova at an event in a soon-to-be demolished block in Soho, with Ruth at Illustration magazine - and all sorts of possible interesting projects
as well as the ongoing books I am working on.
I'll try and put out some more details next month.

Really enjoyed the Dark Monarch exhibition at the Towner - I could see no way to get to St Ives in midwinter so was so relieved to find it was coming so close to home - highly recommend it.
Ditto the Kienholz Hoerengracht at the National Gallery.
Posted by carolyn trant at 14:23 1 comment: