I first saw cartoneras at an evening event at the British Library focussing on South America and loved them immediately - the ones we were shown were made by a re-cycling co-operative in Mexico, an anthology of poems and short written pieces bound roughly in cardboard with individual hand-painted covers. Originally cartoneras - or chapbooks - were made in S America as a protest against the 'selective editorial market during a period of economic hardship', photocopied or non-professionally printed; traditionally not-for-profit, shared among like-minded people outside mainstream bookshops, originally challenging the status quo but inevitably now becoming more aesthetic and less challenging. Those made in Mexico by people on the streets used street people to collect old cardboard who depended on such paid tasks for survival.
This information comes from an essay by Lucia Rosa about Dulcineia in the one I bought ; I have written and paraphrased very quickly and doubtless rather inaccurately but I hope it gives a quick idea.
In a period of extreme chaos here in GB I felt moved to do some very quick spontaneous work referring extreme events, focusing on women, accelerated climate change, political chaos and inequality and the contrast between countryside, towns and the metropolis - and felt, how better than to use old woodcuts of mine printed onto current newspapers to make palimpsests, working spontaneously and freely , abandoning aesthetic considerations where possible and just seeing what happened - an extension of my 'tarot' cards project on a slightly larger scale ( see two posts back...), involving re-cycling of both images and newsprint, and cardboard I collected outside shops on re-cycling day.
Below is some work in progress and my first mock-up book and wet prints ( hence funny angles of the photos trying to avoid shine)....


Similar to the ‘tarot’ cards, the underlying printed matter and images are sometimes clearly visible and sometimes almost completely obscured, with many stages in-between; but even when unreadable IT IS STILL THERE: a time capsule of our times.

Some unexpected and unintended juxtapositions arise. Each book is of course completely unique and the stories you read into them are your own. 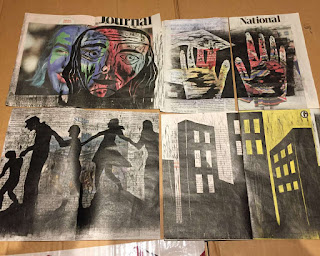 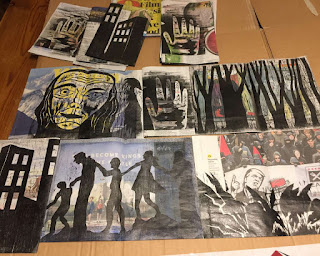 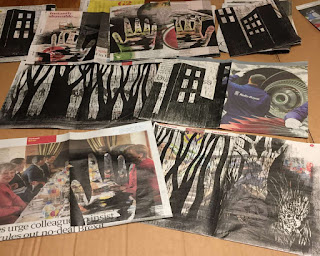 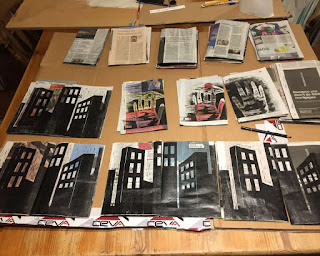 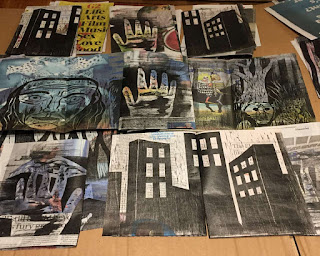 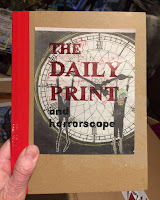 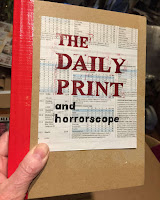 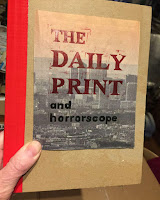 Posted by carolyn trant at 14:10 No comments: