Fool cycles are deep in my psyche, partly through the work and writings of Cecil Collins, and partly through a love of medieval stories and images - Sebastian Brant's book The Ship of Fools, with fun woodcuts, some by Durer, and the paintings of Hieronymous Bosch - I travelled a lot in the Low Countries with my parents during the fifties and into the sixties visiting less well know and better known galleries and museums in Belgium and Holland , and in Germany, and was always more au fait with Flemish so-called Primitives at first then Italian ones, they came quite a bit later, and also much loved.

Cecil, and his artist wife Elisabeth, were good friends of Peggy Angus, who taught me art from the age of 11: one of the  first painting projects I remember being set at school was to paint a Poet or a Fool asleep under a tree and I think we were shown images by Chagall and Collins for inspiration.

Cecil's wife Elisabeth who actually the made the first drawing of a Fool; they were both friends of Eric Gill and lived near him for some time at Piggotts - he introduced them to the writing of Jacques Maritain and ideas about the purity of consciousness which for Cecil became embodied in his drawings and writings about The Fool. All Gill's discussions about this were always directed at Cecil rather than Elisabeth - I will refrain from further comment about this but  all that I am writing is extended in my book Voyaging Out - about Women Artists -see post below 28 April 2019 and September 2019;
I really love Elisabeth's work although Cecil's interests me too, particularly his ideas about mark making. 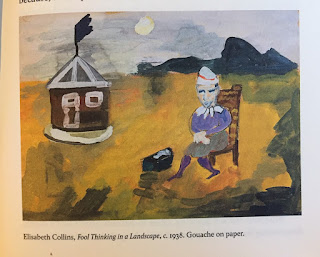 One of my artist friends who was taught by him told me had seen one of my earliest London exhibitions, early 70's? group show at the Acme Gallery I think, and liked my work - I learned this only recently sadly, I never met him but wish that I had.

In Voyaging Out I wrote...
A romantic figure, the fool could also be a seditious one. Writing about the state of Britain in 1948, historian David Kynaston notes the long-standing popularity of the comedian Norman Wisdom, ‘a seeming simpleton…The Gump, that most unwittingly subversive of post-war figures, ensuring without apparently meaning to that the best laid plans of his social superiors never came to fruition’. The Collins’s support for the idea of a ‘Fools’ Day’ mirrored the idea that, as Kynaston puts it, in a still rigidly stratified society ‘every now and then the underdog would have his day’, when the world would be temporarily turned upside down for a short period of alternative reflections.
Its a delightful idea, now somewhat tainted by the new turn taken by populism, so probably safer to stick with more generalised mythic images, medieval, and Tarot - a hanged man Fool maybe, and the wonderful Tyl Eulenspiegel ( owl mirror - I love it ) who met his end on a gibbet after years of mischief-making....
If my fool is Everyman, where will he end up in an increasingly complex world...

Not much else to show today - have cut some more small trial images; unsure of the ethics of non-essential deliveries ( although for me regular deliveries of Asian plywood are essential deliveries) I
have been using the backs of old cuts , just in case we are in for a long haul; not ideal but better safe than sorry. 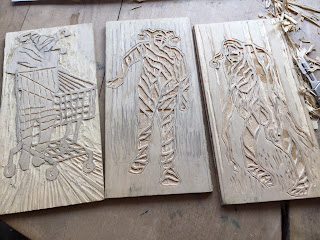 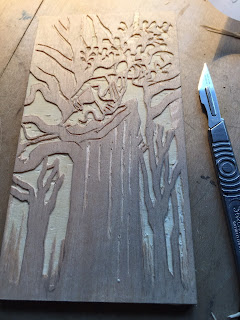 All this show-and-tell about what I have achieved in a day is beginning to feel like a fairy tale - or like Gawain and the Green Knight: the Green Knight brings back his kill from hunting, a fox, a boar and a stag - and Gawain presents a kiss(?) and a girdle and something else I can't remember tho I certainly should having made an Artists Book  of the story.... 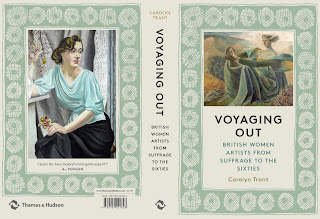