Up and Running again - Thomas Browne and Norwich Book Fair

For the past few years I have exhibited with Turn the Page in Norwich I will have a special display of my books, prints and box art alongside other Norwich specialities at the 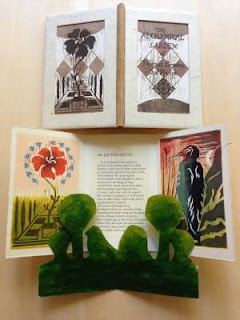 I have also made a new cut-out version of my original book...... 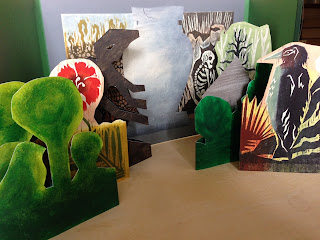 When you come to the fair, do visit the church to see the memorial to this wonderful man – it’s a beautiful church and it sells an excellent booklet with many more details about Browne and his life and work.

Sir Thomas Browne 1605 – 82 was a physician, philosopher, writer, antiquarian and natural historian who also introduced large number of new words into the English language. He inspired painter Paul Nash to make the artists book - ‘Urne Buriall’ ;
The book contains Browne’s reflections on ancient burial customs and the transience of fame.
He had a questioning and non dogmatic approach to life; his humanity made him a good physician and his presence often made patients feel better.

W G Sebald ‘s Rings of Saturn is a wonderful evocation of the man and his life, and his statue is also mentioned in Hartley’s The Go-Between when Marian takes Leo on a shopping trip into Norwich, leaving him to wait for her near the market.

The statue on Hay Hill was erected 1905 as a marker of the three hundred years since his birth. He is depicted holding a piece of ancient pottery although it doesn’t look large enough to be an urn.
The surrounding sculptures representing his various books were commissioned by the City Council more recently.
He is buried in the chancel of St Peter Mancroft Church nearby –with a marble memorial tablet erected by his wife on the wall, and six of his children are also buried in the church. He died on his birthday aged 77.

His coffin was later disturbed and his skull sent to London in a special casket and five casts made; the original skull is now re-interred but one of the casts remains in the church.

There is a special collection of his works in Norwich Central Library at the Forum.

Last year Hugh Aldersey-Williams published a wonderful biography called
The Adventures of Sir Thomas Browne in the 21st Century -
well worth a read;
it makes Browne very accessible - you'll soon be won over by the man too. 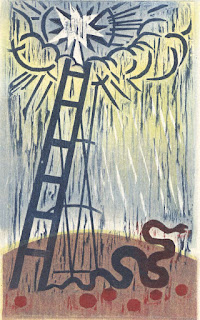 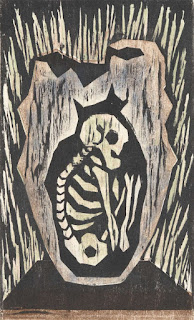 Browne was born in London but moved to Norwich around 1636 and settled there for the rest of his life.  His large and rather splendid house was within the parish, near to what is now the ‘Pret’ on the Haymarket; alongside some more medieval buildings it was demolished in 1837. In it he kept a large collection of natural things, including birds eggs; he was the first person to study the migratory patterns of birds. He also kept a bittern in his garden for a couple of years, a well as growing vegetables and herbs.

He was a practising physician in Norwich during periods of plague. In the summer of 1666, ‘the present and daily increasing visitation of the plague’ was so severe that Justices of the Peace for Norfolk urged Henry Woods, the Mayor of Norwich, to consider holding a market outside the city, so that country people bringing provisions for sale might be at less risk of infection from ‘that noisome
pestilence’.

‘A meadow I use in this city, beset about with sallows’, is how Thomas Browne described the little meadow in the Cathedral precinct which he leased from the Dean and Chapter from at least 1669 onwards. The lease was renewed in 1681. Eventually new houses were built there in the precinct and the remaining small plot is now used as a car park – there is a plaque on the wall there.

There is no evidence that he was an 'alchymist’ but I have used the term to try and convey the all encompassing metaphysical spirit of enquiry in his work and his fascination with growth, decay and decomposition and the passing of time. 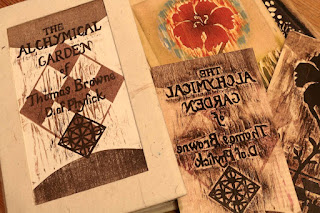 With reference to Kevin's comments below - I really enjoyed talking to him at the fair - I can assure you I only phrased my comment above to cover my back! I work in a very intuitive way and I am delighted if someone more qualified can show that indeed he was. The Garden of Cyrus certainly reads to me as full of that kind of  thinking; it's on my (long) list for further artistic activity........thanks Kevin!
Posted by carolyn trant at 14:19 3 comments: