Theatres of Innocence and Experience

Lonely City indeed...
here is an image from one of my Ship of Fools cartoneras that I found while binding them today...I think the image is actually of Shanghai, so it was very prescient - although done several months ago during the fires and flooding crisis...... 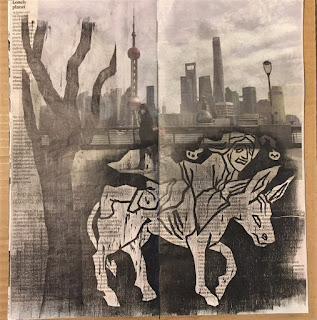 Tonight I am posting up about my Pollocks Toy Theatres again as I was going to bring them to Oxford too; Perfidious Albion is still on display at Pollocks Toy Museum in Scala Street, sadly now of course closed for a while, but I made 5 of each - even though they are not all assembled...I mentioned the Night Garden one a few posts ago....
and I hope I have all the images up the right way now - I have finally found a way of making sure they transfer from phone the right way up...but don't ask me why the texts are now changing size...but I hope they are still readable, I originally had them in a nice exotic font.....
and I have made little digital versions of the texts and images sewn into little booklets available on request or from the Scala Street Museum when it can re-open....

On the opening night at the museum we had a fantastic time looking at each others work and several of us made little performances in the pub next door - carrying stuff in and upstairs, where we were accompanied by musical interjections and two wonderful bassoonists....happy days, seems a lifetime away.... 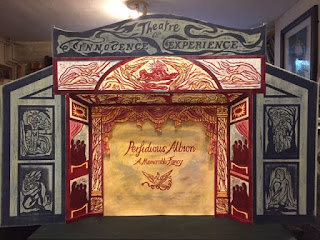 here is the first...and an explanation that I wrote for the museum about what I was doing.....

Theatres of Innocence and Experience

A Melodrama and Allegory for our troubled times

These theatres were commissioned for an exhibition called A Pollocks Gallimaufry
held at the Scala Street, London Pollocks Toy Museum in November 2019.
November is the month of William Blake’s birthday and he has always been a hero of mine as a Book Artist; my husband, who also exhibited, runs the Tom Paine Printing Press in Lewes, East Sussex, opposite where Paine lived as a customs officer and wrote his first pamphlet; so it seemed natural that my first theatre would involve these two men, both of whom used the printing press to disseminate their ideas.
My medium of choice is often the woodcut, arguably the traditional medium for pamphlets and broadsheets of topical and political comment in the past, and also of popular rhymes and stories.
My play-script deals with two topical themes, the romantic and revolutionary dialogue of Brexit, and the more important one of Extinction and Climate Crisis Rebellion.
Paine perhaps represents Enlightenment and Reason and Blake the virtues of Romantic Rebellion, and their conversation, could we but have been party to it, may have discussed moderation and the investigation of grey areas, Dionysian energy and Blake’s theory that without ‘contraries there is no progression’.
Tom Paine had of course already helped with the American Revolution in the 1770’s; he nearly lost his own head in Paris whilst involved with the Revolution there, because he argued that the French King had a human right to retain his own head. Paine himself escaped the guillotine almost by chance.
Blake’s chimney sweep is represented in his stanza –
How the chimney sweepers cry
Every black’ning church appals
And the hapless soldiers sigh
Runs in blood down palace walls.
I would like to here thank and acknowledge Jack Shepherd’s play In Lambeth  which inspired my first scene.

In the Night Garden, the separate theatre that is also the last scene, is an impassioned cry from the heart: how can we face the future generations that will hold us responsible for the tragic destruction of animal, bird and insect life and ravaging of trees and vegetation on our watch.

and here is the text of the scenes 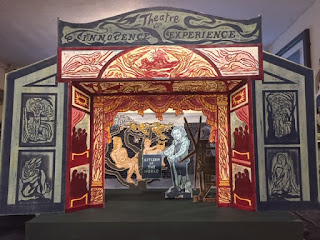 In Lambeth, William and Catherine Blake are sitting naked in their garden, reading and communing with angelic forms, when Mr Thomas Paine enters, escaping from the London Mob under a stormy sky.

They make conversation as Citizens of the World, discussing the Marriage of Heaven and Hell, the Virtues of the Printing Press, and Catherine’s excellent pie.

Mr Blake advises Mr Paine to escape using his back gate and leave for France, where the Revolution is raging; Mr Paine declares:
My Country is the World and my Religion is to do Good. 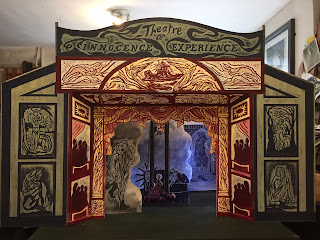 Blake’s Printing Press conjures up a premonition of the Guillotine as the Terror holds sway in Paris – Blake’s Little Chimney Sweep is bemused. 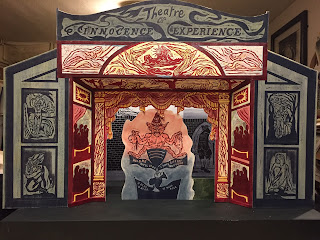 It is followed by a savage interjection from a Printer’s Devil wearing a Liberty Cap, who warns,
Hold Me Well Up or I Will Bite Off Your Head…….. 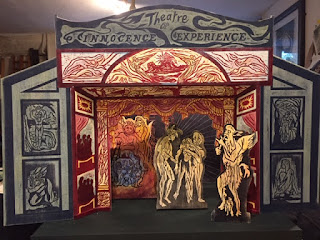 Amidst Smoke and Fire, the Renaissance printmaker Mantegna’s figures appear from his print Virtus Combusta, in front of an image of The Abyss.
Humanity stumbles towards it guided by Lust, Folly and Deceit; Ignorance watches from his throne, set upon a Globe, surrounded by Burning Laurels and the ashes of Civilisation, served by the emaciated figures of Avarice and Fate.
Hermes, messenger of the Gods, tries to intervene. 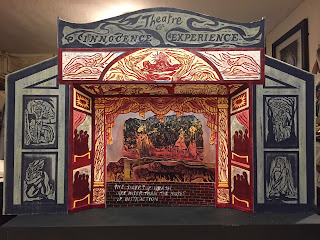 Blake’s figures of Los and Enitharmon bewail the fate of Humanity; Hell is full of Dionysian energy where more smoke reveals a changed scene where three Scarecrows are apparently breaking out of a field.
Blake’s Tygers process from the right, proclaiming that the Tygers of Wrath are wiser than the Horses of Instruction. 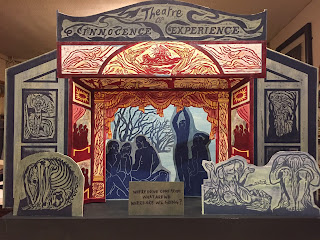 The smoke clears to reveal a clear sky and empty landscape, but for Gauguin’s figures from his painting
Where do we Come From; Who are We; Where are We Going?
A Figure originally picking fruit is holding a light bulb.

In the Night Garden all is not well; 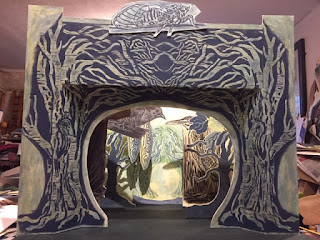 A cast of many creatures is missing or soon to be gone  - the Bittern, Horseshoe Bat, Cuckoo, Corncrake, the Grey-legged Partridge, Natterjack Toad and New Forest Cicada.
Who Killed Cock Robin? No-one takes the blame; what were shoals hang limply from the trees. We are all washed up, adrift in uncertain waters, scorching fires.

To participate in the theatre remove all the pieces one by one until the stage is empty….
And weep.