I'm afraid the Leeds Book Fair was a wash-out for me; I just about managed the first day but my tooth abscess knocked me out after that, so apologies to anyone I missed talking to there or to anyone who was expecting to meet up with me. Three courses of penicillin on, tooth isn't a lot better...
...so progress is slow on Hunting the Wren but I should get something to the exhibition in the bookshop at Pallant House by the end of next week.Some leather went on a book today in an experimental kind of way, and once I can handle it and measure it up for size I can start to make the boxes and slipcases - but I have to make sure they will fit; it is all a bit last minute - again - everything takes always much longer than you think.
I remember spending six days just tearing the paper to size for the pages; spent days printing the images for just a few copies....now I am sewing the books up , very peaceful.

Need a copy for the Bristol fair too, soon now
dates are sat and sun 21 and 22 April, 10-6
at the Arnolfini, 16, Narrow Quay Bristol www.ARNOLFINI.ORG.UK

I've a link too to the PBFA London Book Fair that co-incides with the big Book Fair at Olympia in June; Parvenu will be exhibiting in the Fine Press section at Novotel Hammersmith
click on the link and then on the Fine Press Book Fair heading for details
eventually there will be some images from the books on show too

http://www.pbfalondonbookfair.co.uk
Posted by carolyn trant at 13:14 No comments:

Here is some more information related to yesterday's description , because I often get asked about them, and after a long day's printing it is fresh in my mind.
The collagraphs are made from recycled cereal packets mostly, which means the cardboard relief is very slight and thin, much thinner than a lino-cut or woodcut; so inking up is a very sensitive process.
'Dollies' are little dabbers made of tightly wound up cloth, usually cotton T-shirt type material, although I have got so picky that I am now sensitive to the weave of the fabric - which actually affects the texture of the mark, so that this morning I was scouring the house for something more sensitive and less coarse and had to sacrifice a pair of M&S cotton knickers - just the thing - being thinner and more finely woven than a T-shirt.
How tightly the dolly is wound up affects the nature of what I call the 'incidentals' - in a lino cut these would be the gouge marks, or on a woodcut the knife cuts, of the areas taken away that take up a little of the ink and print in a characteristic way.
On a collagraph the raised parts of the image, the thin layer of cardboard, is fixed - but the dabbing dolly overlaps the raised image and produces a slight shadow of ink which contributes to the effect. It prints more faintly because it is physically further away from contact with the roller when it goes through the press. And this shadow of course varies in each print with the rhythm of the hand and the build-up of ink on the block.
I have to concentrate all the time and be aware of this build-up, but once the first print has been taken it is very difficult to identify a new layer of ink from the old.
And ironically it all sometimes works best when I rely on the rhythm of my inking and do not try to be self-consciously interfering with it.
But the rhythm can vary from day to day and, without completely cleaning the block between each print, some slight variation is inevitable; hopefully this all adds to the excitement of the printed image, the slight feeling of working on the edge;the 'shadow' is an important part of the image; the slight unpredicatability keeps the excitement going for me, and it means of course that each book, though a multiple, is also a unique piece of work.
Posted by carolyn trant at 13:14 1 comment:

One of the reasons for starting this blog was so that my friends and fellow book artists abroad can see images from books I am working on - so the next entry is for Dmitry in St Petersburg.
He does fantastic books and he brings them over here to BookFairs most years ; next will be the Oxford Fine Press Fair in November - you can see his website on
www.nikodim.sp.ru/eng/index.htm
Posted by carolyn trant at 13:06 No comments: 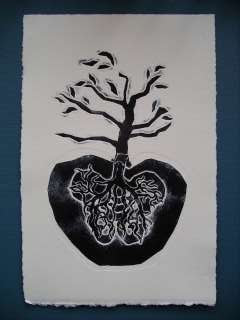 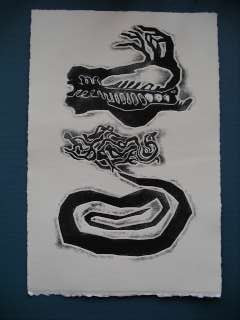 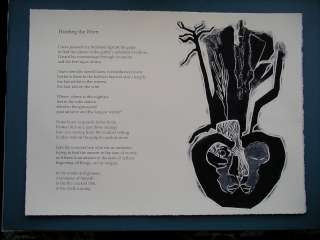 Three images from my next book - 'Bloodties', 'Chanctonbury Ring in december' and 'Hunting the Wren.'
Hunting the Wren is the overall title - two volumes of poetry by James Simpson that will come in a solander box( special ) or slipcase ( regular ) made with lots of natural materials. The second volume is called Love Poems and Curses - I sometimes think of them as a male and female volume nestling side by side but I don't whether James does; but there are 8 poems in each book.

I'm printing at the moment, after days of tearing paper to size. Jane at BIP ( Brighton Independent Printmaking ) is silkscreening each poem onto the paper for me first and they are looking good.

There is a certain amount of pressure because the book is going to be exhibited in the bookshop at an exhibition at Pallant House , Chichester, called 'Poets in the Landscape: The Romantic Spirit in British Art' - to mark the 250th anniverary of the birth of William Blake.
so this feel a really good and inportant thing to be part of - but it starts on 31st March so it is a bit panicky, but that is how most things get done...

I can only go as fast as Jane gives me the texts - we were late starting because the last batch of paper came in half an inch smaller than my previous one and upset all my measurements - I ended up only getting 2 pages out of a sheet instead of 4; this sort of problem is where it all begins with making books, it seems to take for ever to get started and after that the printing should be a doddle, except that that always takes longer than you think as well.

Then pages have to dry - can take days to be safe to fold and bind; and I can't start on the boxes until I have made the first book and see what size it ends up. All very frustrating but its also an impetus to keep going - just to find out what will happen, and of course it could be a disaster...and meanwhile the repetitive printing and folding etc gives one's brain time to wander and come up with some new ideas that start clamouring for attention; it's certainly the doing- things-with-my-hands that gets my inspiration going.

The last few days printing have been full of agonising decisions - printing collagraphs is like a series of monoprints; the blocks are made from recycled cardboard and other natural materials glued on and varnished and the ink is dabbed on with dollies of rag ( very time consuming) - you get into a rhythm so that they come out more or less tha same, but the block is changing all the time with the accumulation of ink, changes of temperature throughout the day alter the way the ink behaves - its a constant process of being aware and reacting to what is going on.

I was taught that there is always the ideal print one is working to where everything is correct, but this doesn't really apply to these - that way madness lies; quality control rejects some but others just vary interestingly ( bit of a metaphor for life really ) and one has to be philosophical - but it is hard after you have spent hours doing the same thing - peering closely - IS that worse than the others or am I just seeing more and more detail? How will someone else see it who hasn't seen the rest? Will it look different when it is dry - I've begun to notice that the infinitesimal shrinkage as the paper dries tightens up the image sometimes and the paper grain smoothes out again....it all gets very obsessive.

There is a tempatation to just keep on going - it becomes addictive;

pros - if it is going well stick with it, you have got into a rhythm, you have mixed the right colour ink ( this can take up quite a while ), if you stop and clean the block too many times the bits of natural materials will drop off, you have got used to remembering what you are doing, just one more, never mind that it's midnight....it really needs a bedtime . mealtime or complete powercut to stop sometimes;

cons - its not working well but it can only get better ( can be a false premiss - maybe you should stop and start again fresh tomorrow); you may think it's going well but when you see them tomorrow..... and you think it is going to save time to have them all done - but not if you have to do them all over again.

To think I gave up tempera painting because it took too long to get my ideas out! this impulse to multiples is torture when I have so many more ideas coming at me - but if you think you have come up with a good idea there is a sort of compulsion to spread them around a bit, especially if a lot effort has gone into getting the first one up and running.

Well it won't be ready for the Leeds Book fair next week, but I suppose I may be able to take some pages to show if they are dry enough.

It is 11- 6 in the main Parkinson Building on Friday and Saturday 9th/10th March.

Posted by carolyn trant at 11:50 No comments: