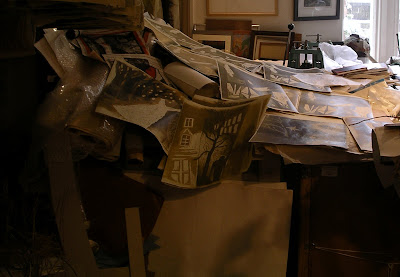 PHOENIX GALLERY ; BRIGHTON
PRESS AND RELEASE - 26 April - 7 June
Tues - Sat 11 - 5
'A celebration of Artists Books and independent publishing.....'
I have some small pieces of work in this exhibition and look forward to seeing it.
www.phoenixarts.org
I am also talking at the ARLIS Artists Books Workshop at the V&A on 9th May which accompanies two exhibitions just about to start there - 'Blood on Paper' and 'Certain Trees, the Constructed Book, Poem and Object 1964 - 2006'.
see the NAL web pages about artists book:
http://www.vam.ac.uk/collections/prints books/features/artists books/index.htmlor BL web pages
http://www.bl.uk/collections/britirish/modbrifin.html
Posted by carolyn trant at 06:34 3 comments: 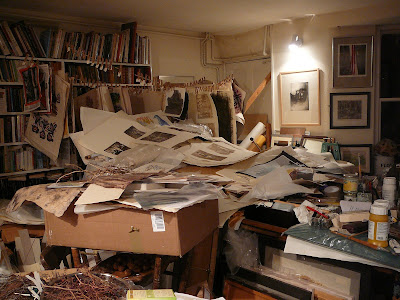 ....and the work piles up
literally
It's been a difficult year so far, lots of time spent looking after ailing members of my family, alternated with spurts of activity done with a disconnected head and hand ( often an interesting alternative way to work ).
I am trying to get to grips with using allergy free and benign Japanese plywood, rather than my favourite old rough, packaging plywood that I used to enjoy hacking away at with my scalpel. I am trying out using gouges on the softer wood ( less sharp knife-work) in a very free manner and making reduction prints with several layers of colour ( and without working much out in advance ).
I have also bought a new supply of wonderful hemp paper from Khadi; it is a good size for folding into a book page, either in 2, or especially in 4, which makes the best use of my (not particularly large ) etching press ( 18" wide with an extra long -40"- bed provided for me by John at Rollaco).
The smooth hemp paper means I can now print the woodcuts with the press without the texture indenting the blocks like good old Nepalese loktar J4; I must say my spooning hand is relieved about this development.
I have just read a quote from Hilary Peplar talking about his Stanhope Press '...when man first discovers how to make anything, that thing which he makes is good....' - I am not sure I am taking it the way he is thinking but I do find I am always excited about changinfg my way of working and new materials, there is an excitement in the battle which supercedes all other aeshetic considerations and in a way that makes 'good' or 'bad' irrelevant.
I read this quote in a wonderful new book by the (sadly) late Peter Holliday 'Edward Johnston; Master Calligrapher' - brought to fruition after his death by his sister Susan Skinner and published by the British Library and Oak Knoll Press.
I went to the launch at the Ditchling Museum, where there were several members of the Ditchling Craft Community , and enjoyed various discussions about why we do what we do.It was a bit like arguing with Peggy (Angus) all over again.
The previous day I had been to the opening of an exhibition of drawings by Peter de Francia at Charleston. The handout was a reprint of something Norbert Lynton had written in 2004. he quotes de Francia writing in 1984 -
'One of the most deep-rooted prejudices that this country suffers from is that of a profound aversion to philosophical concepts of any kind and notably to such concepts forming the basis of either the structures of culture or systems upon which critical theory can be founded ....Amongst practitioners and critics the very notion of art having a direct relationship to politics or sociology invokes responses close to panic or incredulity.'
I am still thinking about that one.
Norbert reckoned the English ...'can take the rough art and smooth, wild and pacific, decent and indecent, and yesterday's shock horror sensation is today's norm, but we will not put up with art that says anything significant, art that troubles our minds.'
Probably.

I am still making books about the Falcon Bride....
here she is passing through the kitchen studio - the photographs are by kind permission of Judith Kazantzis who took them when she last came round for a meal. 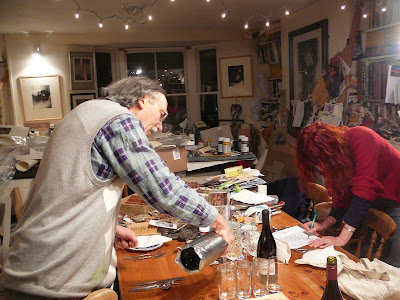 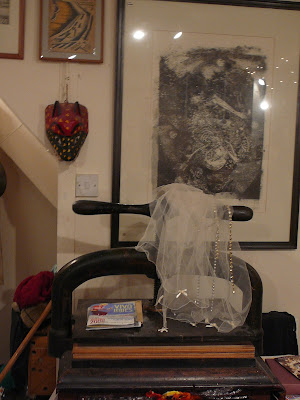 Posted by carolyn trant at 07:38 No comments: