The Falcon Bride at LAB07 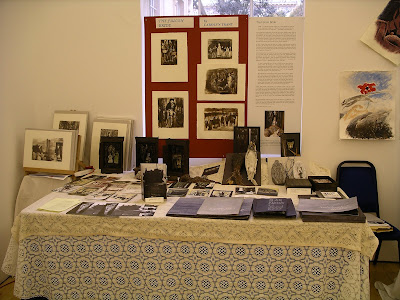 Here it was - as much as I could squash onto my stand; the poppy image on the right belongs with Peter's stand next door.
I think it was too much for people to get to grips with really and many passed nervously by, but there was also a lot of interest and some positive comments, ranging from - it was a bit different - to - it really seemed to mean something about something I cared about .
It was frustrating for me as I really could see how I needed to spread it out in the way I had in the galleries , and with some comfortable chairs, and with time slowed down; but it was good to be able to introduce it to some people who had missed it in Sussex.
It was interesting for me to see my books in the context of what was going on in the rest of the fair; it won't really alter what I do but it is good to have glimpse of the outside world.
I am now planning how it might become a bigger limited edition book, including and pulling together various parts into one volume, for the WOP Fair at Burlington House in January-
3 days sitting and looking at it all helps the mind move freely about.

I'll be talking about my work with slides and a few real examples
at a talk organised by the Designer Bookbinders
at
The Art Workers Guild 6 Queen Square London WC1 at 6.30pm
(nearest tube stations Holborn or Russell Square )
on Tuesday 4th December
( entry £7 for non-members )
see www.designerbookbinders.org.uk
Posted by carolyn trant at 07:51 No comments:

They are coming thick and fast - next stop is the London Artists Book Fair at the ICA.
I will be showing a reduced version of the Falcon Bride Installation, and showing some of the film footage I took of it at West Dean on a mini dvd player.
Following requests, there will be a few bits of it reproduced for sale - the Boat Books, sets of the Krakov cards, and the printed Falcon Bride book in the box; as well as some prints.

I am stand 63, in the Upper Gallery this year, next to Altazimuth Press; the Fair is in 3 different rooms so follow the signs so you don't miss anything.

Three days is exhausting in some ways but on the other hand it gives slightly more time to get round and see everything - Oxford felt particularly frantic this year , it is such a social Fair - catching up with people from two years back, and two days isn't long enough, especially when having to cram in giving a talk as well. However it was lovely to see lots of new faces at the talk about Peggy and gratifying to find still a lot of interest in her ideas.
I suppose my main point, thinking of her in relation to Private Press printing and Artists Books, was just how much power hand-printing gives you to get your ideas out into the world, and in a relatively unmediated way. Also how important the two-way relationship with those looking at what you are doing is and how it is worth considering how that takes place.

The biggest excitement at Oxford for me was seeing the new amazing pochoir books and monoprints done by Walter Bachinski with Janis at Shanty Bay Press. The colour in the pochoir work is glorious and I love the images as well.
It was real treat to see his illustrated talk, and wonderful to have a meal with them( together with Denis Hall and Carol Manheim ) and get to know them better, arranged by Simon and Gill McMinn who were putting us up and looking after us in a very wonderful way. It was great to catch up on some of the work I was missing in the rush at the show, in Simon's own fantastic collection over breakfast.
Altogether it was a wonderfully social weekend as we started off getting to Oxford viaCheltenham, and Chipping Camden to meet Stephen Cohn and Laura - he wrote to me after my image appeared on the Agenda edition in which he had written an article about Rilke and which included his translations; we enjoyed seeing his prints and presses. Driving round the Cotswolds in glorious autumn sunshine and colour was a real joy.

The most recent excitement has been the wonderful new show at the British Library - Breaking the Rules - Avant Garde Books in the first half of the 20th century, curated by Stephen Bury. We have been twice already, there is just so much to see and enjoy, its quite fantastic. For me it put flesh on the bones of some of the less well known names I had heard of when writing about Peggy's trips to Russia and the Ukraine. I loved the way it was arranged in cities and set things in context. It was a real shame our Russian friend Dmitry Sayenko missed the opening by a few hours as he had to catch his plane back to Germany to put up his new show.

Dmitry really got into the swing of Lewes Bonfire Night, it was a wonderful evening - he also liked pebbles at Hope Gap - where we all started collecting pebbles and letting our imaginations run riot - Brighton, Chichester Cathedral and West Dean.

Together we also went to the Baselitz exhibition at the RA ( second time for us ) - another really great show; amazing to think what he was doing while I was at art college, and that I never saw; incredible how little exposure German art seemed to get in the 60's and 70's in the general run of London exhibitions. Beuys was very visible in London, but despite visiting Germany a lot as a child and teenager I lost touch at the crucial point it seems - I should have been more pro-active. Interesting to ponder what I would made of it then; had my head down printing wallpaper and being bucolic on the south downs ( that Peggy has a lot to answer for ) -love it now.
Love too many things - hard to focus on what I love best!
Posted by carolyn trant at 01:40 3 comments: