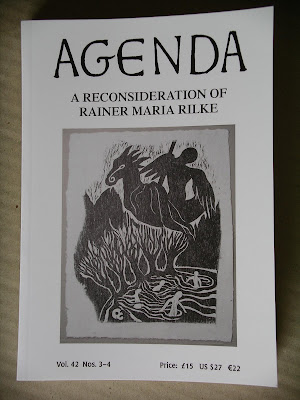 This month I am very happy and honoured to have one of my images on the front cover of Agenda, especially as it is a particularly large and wonderful volume devoted to the poetry of Rilke.
We chose the image carefully to be appropriate for the volume but deliberately did not give it a title, because it in fact comes from my book 'Gawain', but I hope on its own it stands for other ideas too.
We also considered these two smaller woodcuts of Orpheus, which come from a book I did using a poem by Peter Abbs. 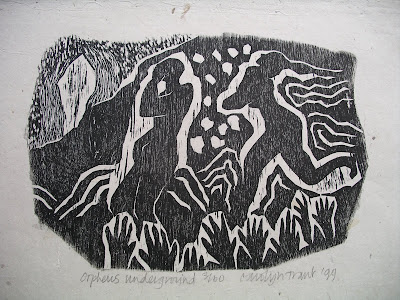 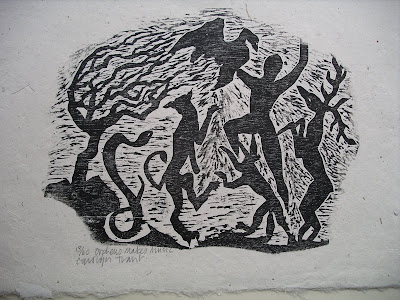 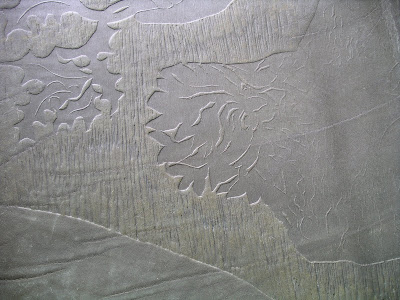 Gawain was the first Artists Book I made , in 1997. It was made as response to seeing the opera by Harrison Birtwistle with libretto by David Harsent - wonderful words, which inspired images which were rarely related to what was going on on stage visually; but close I hope to the spirit of both the opera as a whole and the medieval story of Gawain and the Green Knight. In fact I came to feel totally consumed by this spirit as I set myself the task of completing the book , like Gawain's task, in one year and a day.
It was quite a hard labour, twenty woodcut images about 60cm X 40cm, plus their corresponding texts. It was the first time I had cut text before and I decided to just be guided by the marks of my scalpel, making the letter forms from straight and angled cuts and following the flow of the ( considerable ) wood grain of the plywood.
David bravely gave me a free hand in choosing the extracts of text.
I printed ( and sold ) 20 copies, burnishing the prints by hand with a spoon on rough Nepalese Khadi loktar paper, which has so much wonderful texture in it ( including small lumps of clay and roadgrit and even the occasional crushed Nepalese spider ) that using a press runs the risk of the paper making damaging marks on the woodblocks!
The pages were sewed directly into a cow-hide, thick leather, that I had specially dyed a wonderful dark green; each book used 'half a cow', and I kept the edges untrimmed, exactly as they had been stretched, to echo the riffled edges of the paper.
Front and back were blind-embossed with two of the woodcuts, very difficult to photograph as they catch the light in strange ways, but I include a detail above ( should have rotated the image 90 degrees but it gives you some idea ).
The book won the first Society of Bookbinders competition for the Complete Book; I'm not sure it was an entry they quite expected but everyone was very encouraging to this 'parvenu' press.
I reproduce it in full below to give the complete story 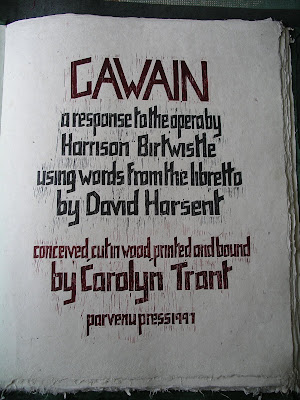 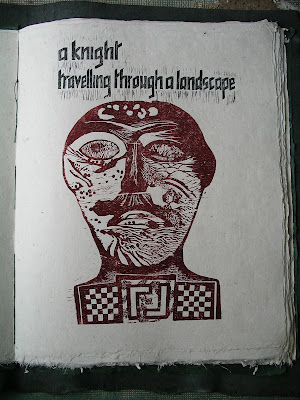 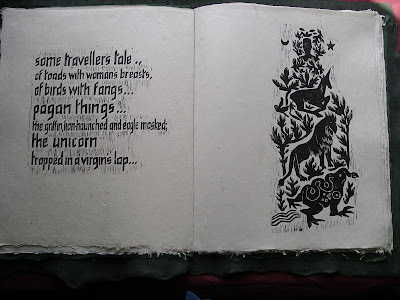 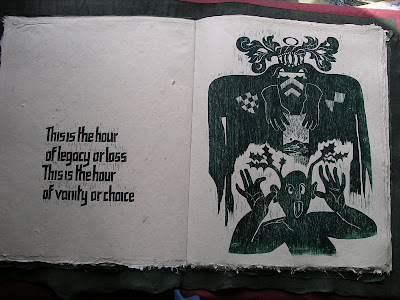 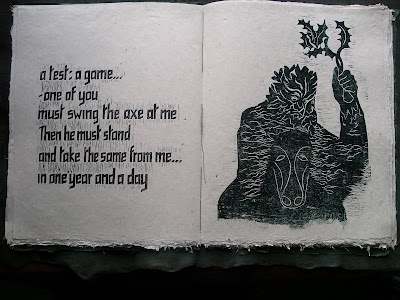 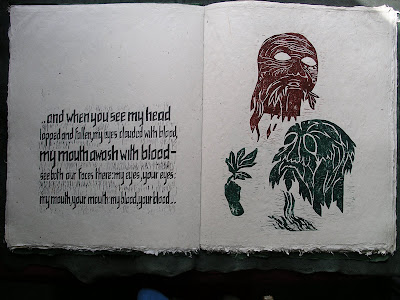 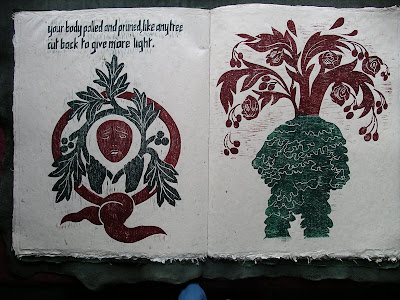 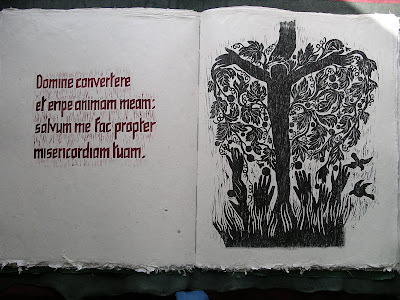 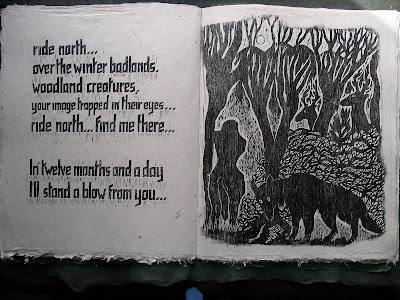 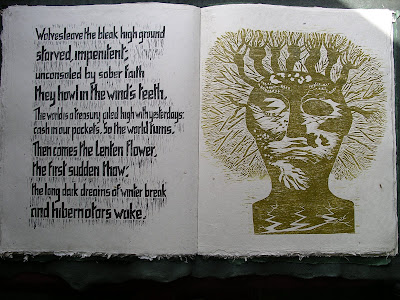 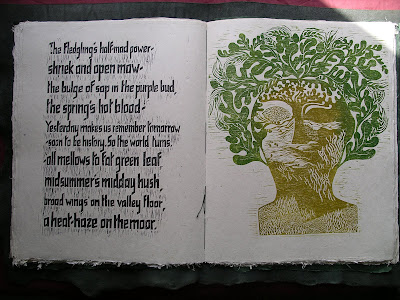 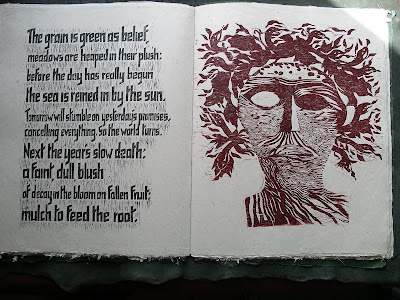 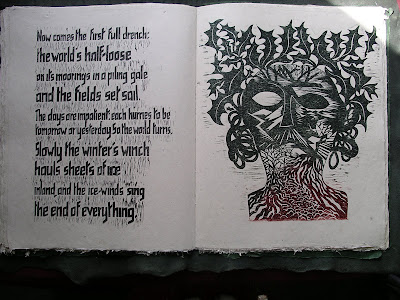 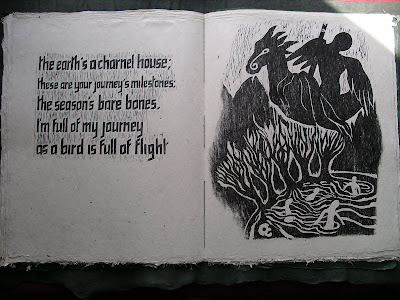 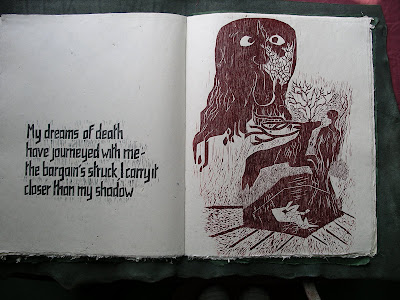 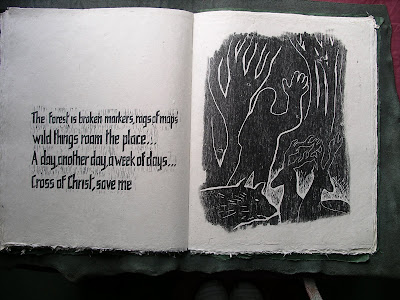 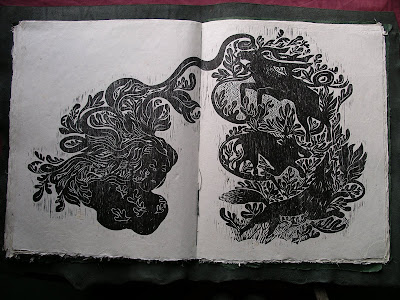 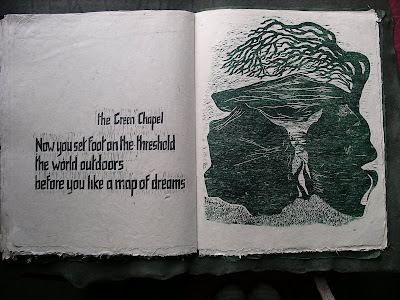 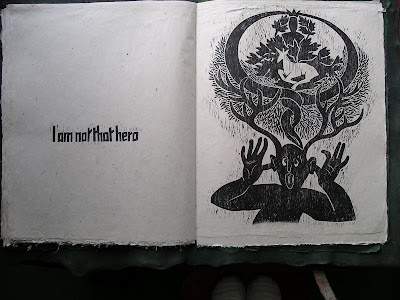 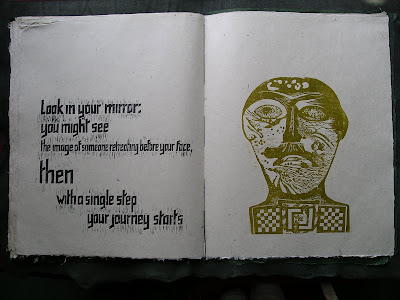 Posted by carolyn trant at 12:42 No comments: