What we have been up to 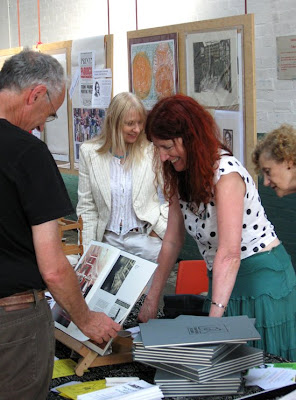 A quick update....
for pictures of the Tom Paine Printing press in action, do go to John May's blog where he has posted up some really good pictures. Look under 'Posts' for Tom Paine Printing Press.
All those involved with the Press, and Paddock Printmakers new book and exhibition, have no time at present to update their own websites, so many thanks to John for putting us on his.

Also check out the post on John's blog (The Generalist) where you will also see he has written about John Michell's Memorial service in Ladbroke Grove a week or so ago; John was a lovely man I first met through Keith Crichlow. Keith gave wonderful lectures at the Slade; among much else he introduced me to Kathleen Raine's books about Blake. He performed John's eulogy.

The picture above shows Paddock Printmakers at the Do-At-The-Depot last week, advertising the studios and showing our new book - Tom Paine in Lewes and the original prints used to make it. Here I'm showing it to Julian Bell while Vivien Halas looks on - she is one of the printmaking group but was also promoting her book about her parents,'Halas and Bachelor', who made influential animation films in the forties and fifties, including the animated 'Animal Farm'.
In the background you can see June - June is a printmaker and her husband Peter did all the graphic design for our book, and provides support extraordinaire. You can see them both behind me on the picture on John's blog.

The Do was to launch the new Lewes Pounds - new designs, and new denominations of currency pending I believe. The only currency in the world to have Tom Paine on the banknotes!

The Paine Festival has been a treasure trove of interesting lectures and events; the High Street was closed for an afternoon and there was dancing in the streets, as well as lots of dramatic events and a Mummers Play about Tom's life in Lewes.
The Generalist also now has a lot of photos of the dancing in the streets - check out the one headed 'Nail Dance'.

The highlight for me was (archaeologist)Martin Brown's guided walk celebrating the spirit of Independence in the town, with costumed figures delivering their testimony - sometimes moving, always inspiring and very informative - covering the Peasants Revolt, Bonfire and its origin in religious persecution, the Civil War, artistic freedoms, Edward Warren ( the Warren Cup, Rodin's the Kiss and the gay community at Lewes House at the beginning of the twentieth century ) - ending up on Cliffe Bridge to celebrate Independent Brewing with Miles Jenner of Harveys Brewery.
You may know Martin from occasional TV archaeology programs; his walks are brilliant and this one was particularly well attended with a very spirited crowd.

Seth Gopin, from Rutgers University USA , has been doing a wonderfully lively introduction to Tom Paine's life and work in the Town Hall each day; its been great to get the American perspective on this, as well as learn the results of the new research done by Seth, Paul Myles, local historian Colin Brent, and art historian Deborah Gage - descendent of General Gage of Firle Place ( just outside Lewes )who commanded the British troops in the War of American Independence.

Sales of our Book and prints are going well and hundreds of people have passed through the Press - around 200 each day.
Check out the Tom Paine Printing Press website in a week or too to catch up on recent developments there.
Meanwhile I am hoping to get back to work on my own books soon!
Posted by carolyn trant at 01:42 No comments: