I've found some more photos of Virtus Combusta pictures I put up yesterday - they may be slightly clearer, they are hard to photograph because of the layers and shininess of the collaged pieces, so I will try and add them too when I have a moment. I was able to read some of the titles too - Into the Abyss, Rocketman, and Manspreading.... 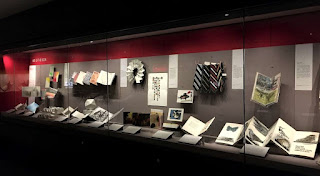 However I was going to post about my unofficial Extinction Rebellion book tonight; the British Library very kindly sent me  a photograph of Map of Lost Cuckoos in a case of Artist Books in the Treasures Gallery, indeed next to the case with the original Magna Carta...., see above
and below
The Library has now also added my blog to their Covid19 starred selection for future researchers, which is nice to know - I love the BL and am very glad to be doing something vaguely useful possibly - keeping notes for the future... 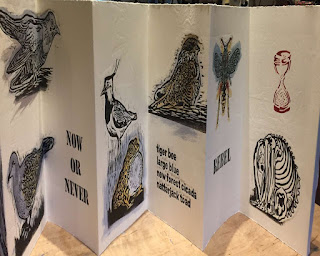 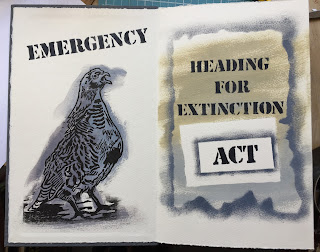 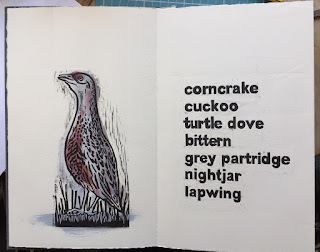 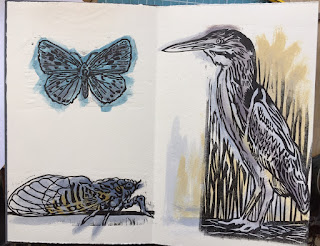 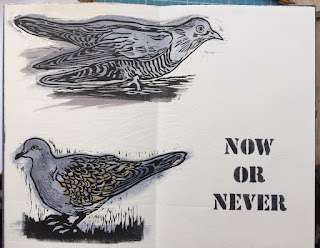 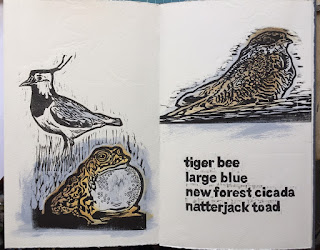 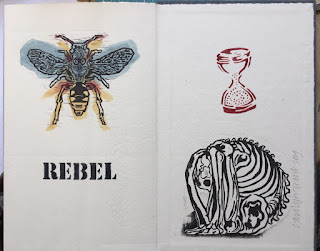 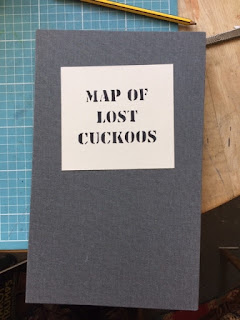 I do belong to Extinction Rebellion as a sympathetic member, and I loved the poster campaign they had around Lewes last spring, so I pinched some of their slogans and made stencils, and made my own list of endangered British species to make woodcuts of...for Map of Lost Cuckoos
I then also made cartoneras printing words and images over newspaper pages about climate crisis....
its a shame you cant read all the words low res...
I think I have 3-4 copies left of both versions, posh hardback concertina and cartonera that I was intending to bring to the FPBA Fair.... 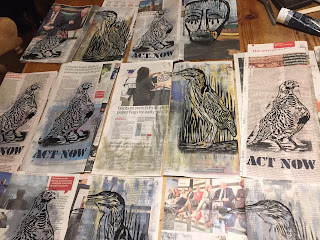 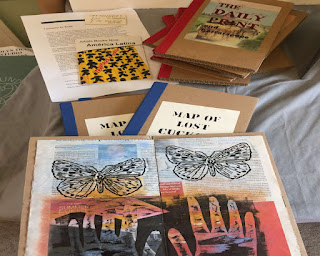 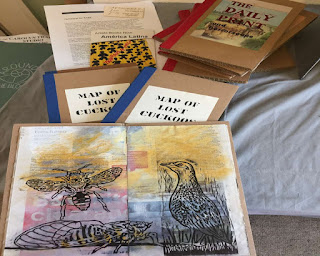 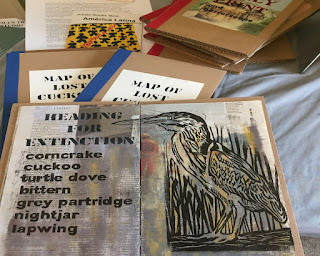 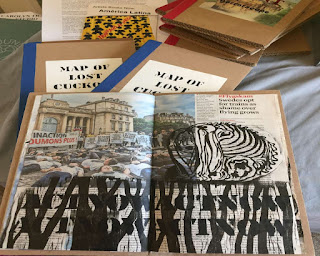 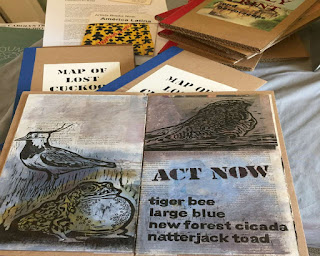 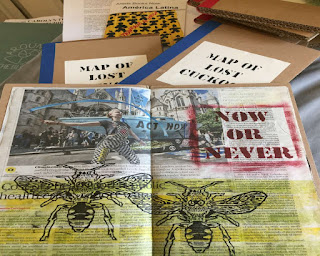 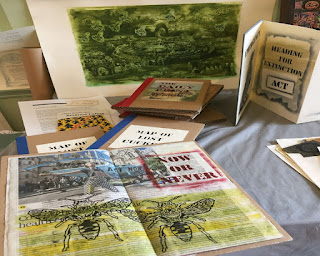 behind the last one of these is a very green drypoint I made based on a 16th century Arcadia picture into which I introduced some winged and flying insects....
Climate Crisis has now of course been superceded temporarily by virus crisis; one can but hope that the planet is having a little break to recover with us all not rushing around  as much as we usually do, but I was pretty disgusted that HS2 workers seem to think they are essential - still cutting down ancient woodlands for something that may at the end of all this turn out to be un-affordable or no longer viable or sensible....while ER campaigners are following the rules and lying low.....

I am planning to do some images of the campaigners in some of their very visually exciting events; and the subject of the next book I do with my printmaking group - Lewes Printmakers, is going to be about Climate Crisis this year ( or maybe now the next as all our meetings  have been cancelled...including some joint events with the ecological centre where we meet in Lewes, Linklater Pavilion on the Railway Land, together with the local group of ER; some may still be possible as they are outside summer events ...we'll see)
If you scroll back through posts you will see our previous events and books advertised; our last book was called Sylva, Lewes Trees inspired by previous Lewes resident John Evelyn in the 17th century, one of the first ecological arborealists....
We make 'community books' - digitally using the group's handmade prints on subjects that we hope will appeal to a good cross-section of taste encompassing natural and social history and they are very popular, and we even get occasional requests from abroad if people find us on the web....
we have done quite a few over the years, High Street - inspired by Eric Ravilious, Lewes Pubs, books about residents such as Tom Paine and Gideon Mantell, The Battle of Lewes for the big anniversary year, The Spaces in Between -Twittens, The Railway Land nature reserve, our River Ouse, the Sussex River from source to sea...
we try to be topical.... The group send me text and then mine is the voice pulling it all together....
no wonder I am always running out of time.....
Posted by carolyn trant at 13:12