Welcome to the Circus

And apologies for not blogging yesterday - I had a frustrating weekend with a burst boiler hot water pipe so no gas or water as had to turn everything off and it took 3 days to sort a plumber - nightmare; got a nice man today - so very strange letting someone into the house after all this time and dressed like a surgeon with glove and mask to operate on our pipe  from the back garden....

and we have agreed I will not print all James's poems except perhaps the first one to start you off so you can see how the words and images are just a counterpoint to each other...then I will write a commentary in normal lettering with maybe further snatches of the poems in italics.

These circus images are not what you might expect from the poem at first - but jolly circus images show of course violence, animal torment - being ridden and baited and made to perform; a woman being shot upwards in a cannon, having knives thrown at her, being sawn in half .... acts that are on the edge of the abyss, like we are, on the high wire, in the wings, a world on fire, clowns and fools....

I am showing them in order

The first one introduces the Tiger: as I explained previously the remaining skull from a taxidermied tigerhead he was given and ritually burned. It faces us menacingly, confrontationally, propelled loomingly from the forest, from within which a small circus tent can be seen glowing in the dark...

underneath the printed image is a faint suggestion of a hand-painted skull , maybe of a human -you can't see it but I know it is there.... 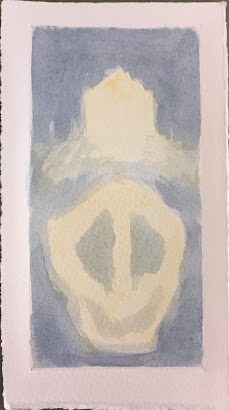 here is the first poem:

An offering of grain:

an offering of drink.

for making you a stuffed head:

your jaws set to grimace

for a hundred years:

your eyes as jewels

Is the tiger listening

Place its skull in the river,

place a leaf on its tongue. 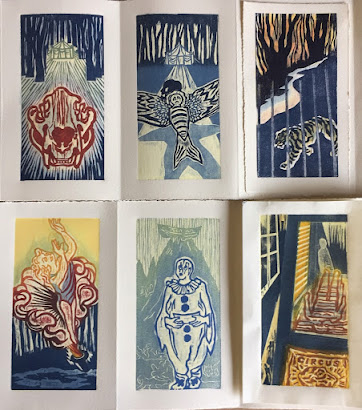 In image 2 we are introduced to a magical creature drawn to the lights of the tent; the forest is full of magical creatures if only we can stop destroying them and their habitat and see their beauty and strangeness, so much they could teach us....the poem describes a  child in the birch bark cot...warm in his bed of moss, in his fish-skin clothes....

Image 3 ...but the forest is burning and we are complicit: the river is drying up to a trickle...Blind Tiger your forests are gone and the rivers silt with effluent.... the borders are diminishing, we are on the edge of catastrophe, the tiger paces within his confines.

Image 4 ...the circus acts begin. We can shoot a woman into space, but it is no use trying to escape the mess on this planet, are we looking for somewhere else to exploit? the poem talks of  ...the wound's dark hole...

Image 5 ...the Fools of the previous 3 packs of images have become Clowns, one of their various manifestations, some less wise than others. We are indeed in the Age of the Buffoon - we are currently led by one. The Clown clutches his bowl - empty of ideas, against the backdrop of the Great Flood (as depicted by Bosch), the Ark abandoned on the mountain top, the land littered with the dead and dying of all species, dog eat dog. The poet wakes to ...stand on this mountain as waters rise...life is ending in a putrid crucible and I am here cupping water.

I put image 6 to balance the set and show how the colours rise and fall but I will start from there next time and continue - hopefully next Sunday if the week is good to me.... it is a long business and will last into September I fear but I am enjoying taking it steadily and it is nice and cool in my basement; rain forecast for the end of the week so darker down there in the late afternoons evenings which may be problematical....