As usual I will be opening my studio at the Con Club 139 High Street for ArtWave
(let me say here it is NOT the Conservative Club but a wacky live entertainment venue so all may darken my door) for the weekends of 18/19 and 25 - 27 ( including bank holiday monday) and 1-2 September....
there will be old work and new and work in progress - books, prints and bits and pieces including cards 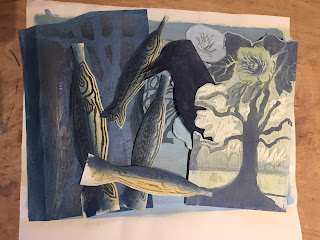 and I will also be selling our new Lewes Printmakers book, hot off the press, which this year is called SYLVA

This book is named after an important work by John Evelyn (1620 –1706) Sylva a Discourse about Forest Trees and the propagation of Timber. Evelyn lived at Southover Grange in Lewes for most of his childhood, attending a free school in Southover – the original Lewes Grammar School. A radical Lewes character, he later travelled to visit formal gardens in France and Italy instead of fighting as a Royalist in the Civil War as would have been expected for one of his class. He understood and promoted ecological principles among his contemporaries and influenced many horticulturalists and landowners from the 17th century onwards, favouring informal use of trees alongside more formal garden designs.

Sorry I have been so busy I have only just picked this up - if you send me your details by email to prints@lewesprintmakers.co.uk we can work some thing out - maybe post a copy to you if necessary.
many thanks for your enquiry
Carolyn